My girlfriend and I are celebrating our one year anniversary, so I wanted to make her something kind of special. I had this idea of placing her first initial, V, inside my first initial, M. The ambitious part of me wanted to make some sort of necklace with a V-shaped hole in the M, with a small PIC that controlled a few RGB LEDs. The circuitry was pretty simplistic, the only novel idea I had was using two microcontrollers in a master/slave configuration. A PIC16 dealt with the four button inputs and controlling the five LED enable lines. A secondary 8-pin PIC12 connected via SPI did the PWM to control each LED's brightness. There was probably a better way, but our anniversary was quick approaching, and haste makes waste they say. 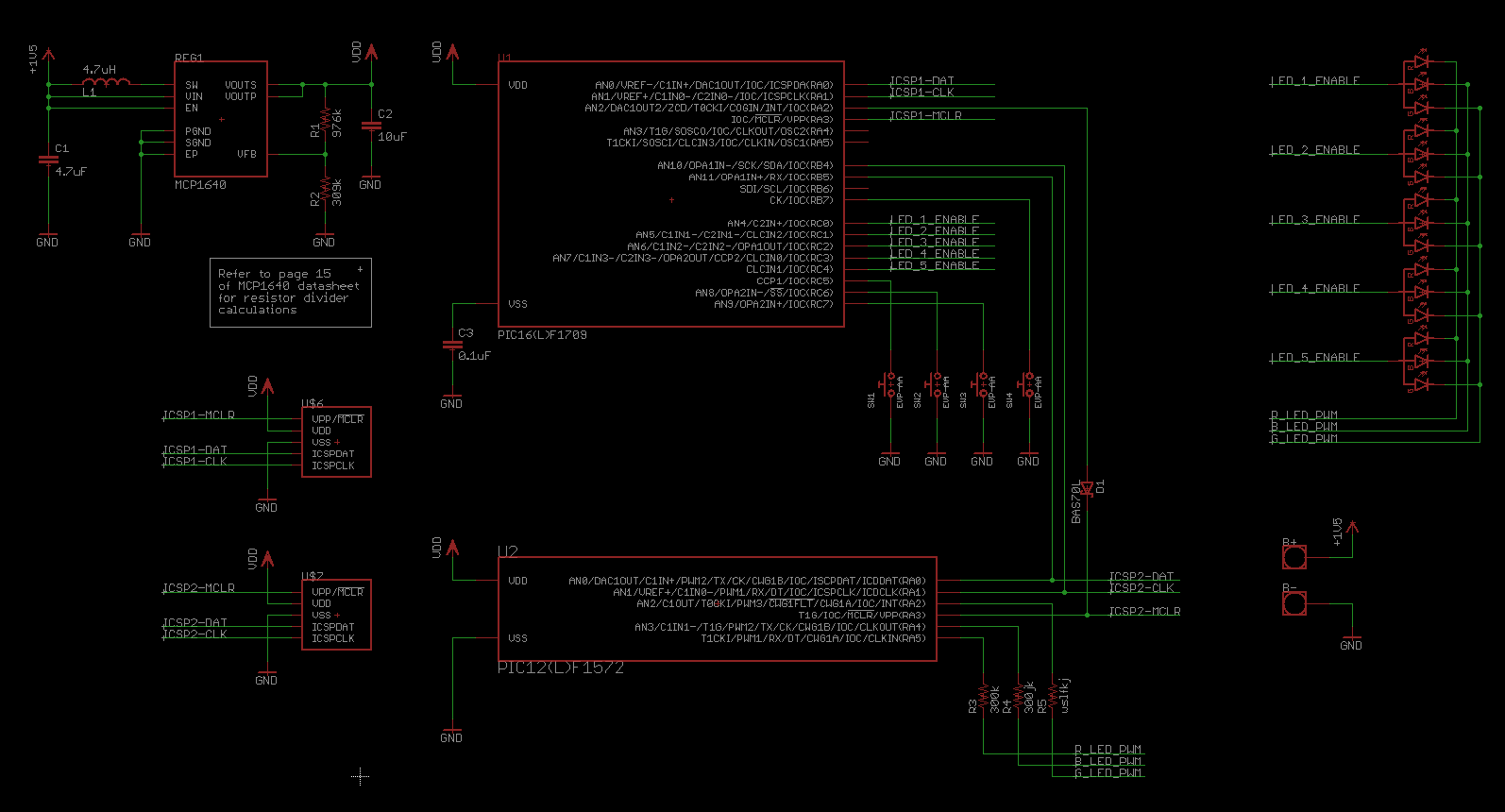 The battery was mildly tricky, I was planning on powering it from a small triple A or coin cell in the clasp behind the neck. The chain would actually carry some small current down to two pads on the top left and top right of the board. The idea was that just connecting the chain in the back would complete the circuit and turn the necklace off and on.

Routing is where this all fell apart. Even on four layers I just couldn't get the shape of the M and the V to be very pleasing and also have enough room to route everything down the remaining board area. Eagle was a pain here, the time it takes to import something from Illustrator (where creating desirable shapes is a somewhat pleasant experience) into Eagle and get the scale right is a huge barrier. Importing bitmaps is easier, since the ULP creates this solid shape out of lots of skinny polygons, but it's more painful when you actually want to import a shape to use as the boundaries of a polygon. Keep in mind here that the necklace was only going to be about 1.5x1.5 inches. Probably too small a goal for a two week project. 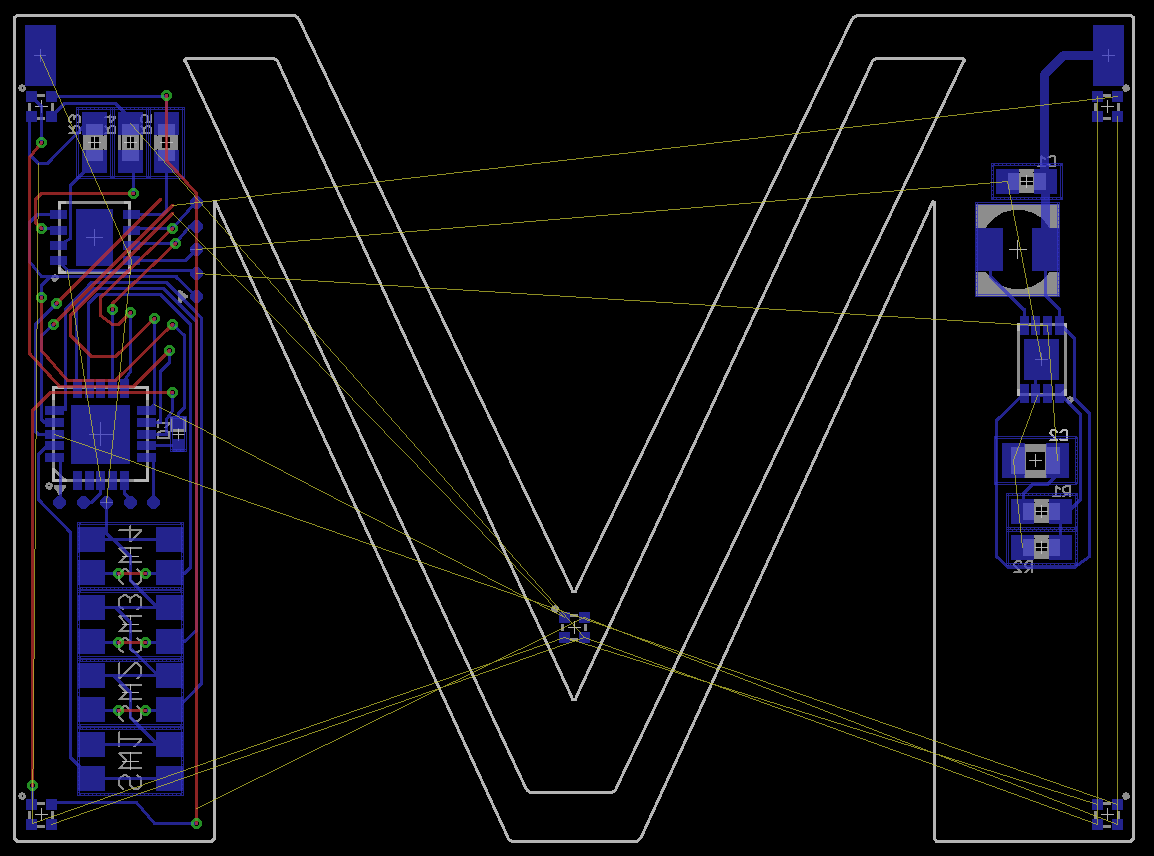 I had been looking for an excuse to learn how to use the water jet in Georgia Tech's Invention Studio, and my friend had some spare aluminum sheet he wasn't using, so I figured I could adapt the shape and still make a nice memento. I drew up the design in Illustrator, having a little more fun with making the letters pleasing, since I didn't have to worry too much about the board material or the capabilities of OSHPark. After the drawing was done it was quick work to get it carried over into the OMAX's software as a DXF. The machine in the shop can cut through inches of steel and granite so it didn't have too much trouble with the quarter inch aluminum plate. 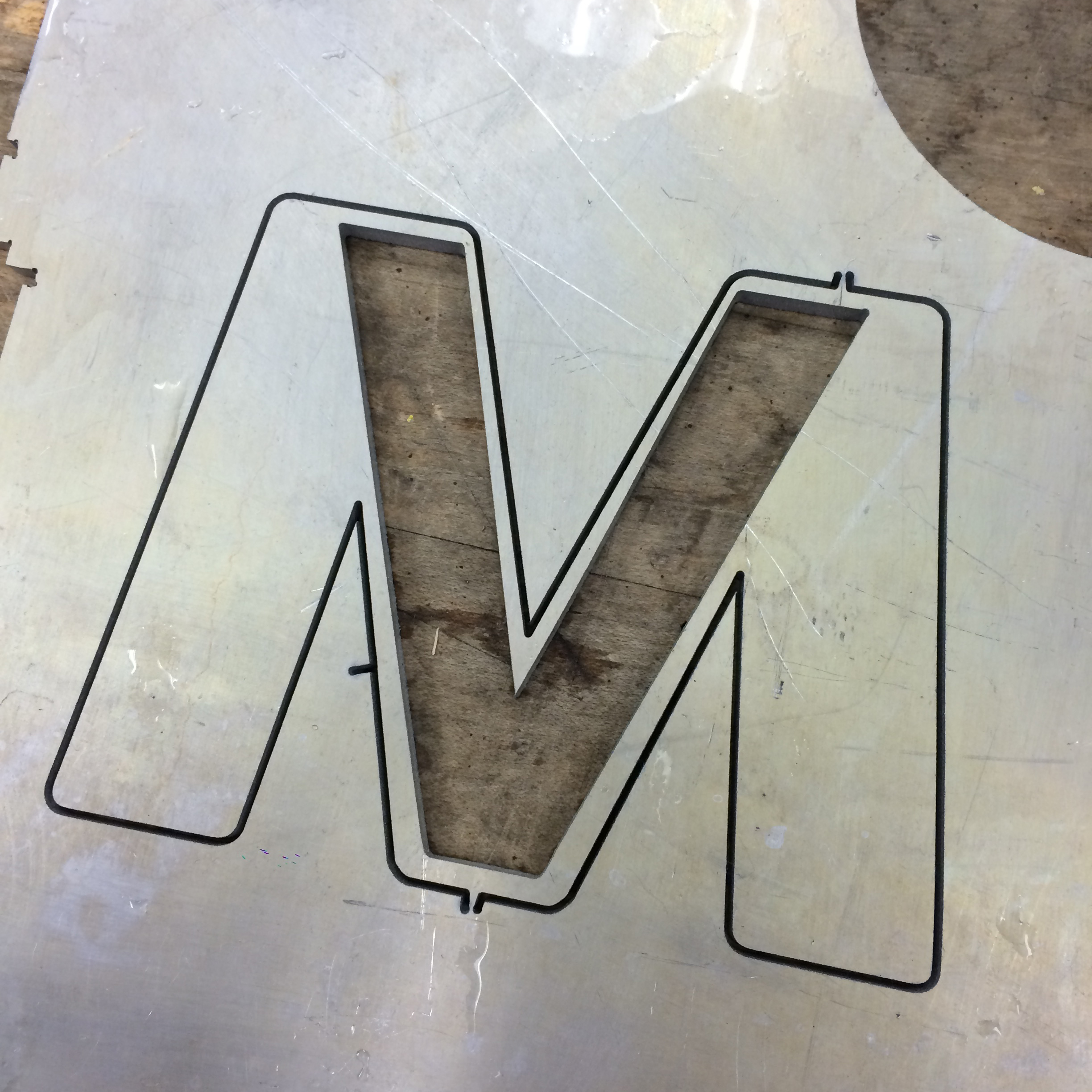 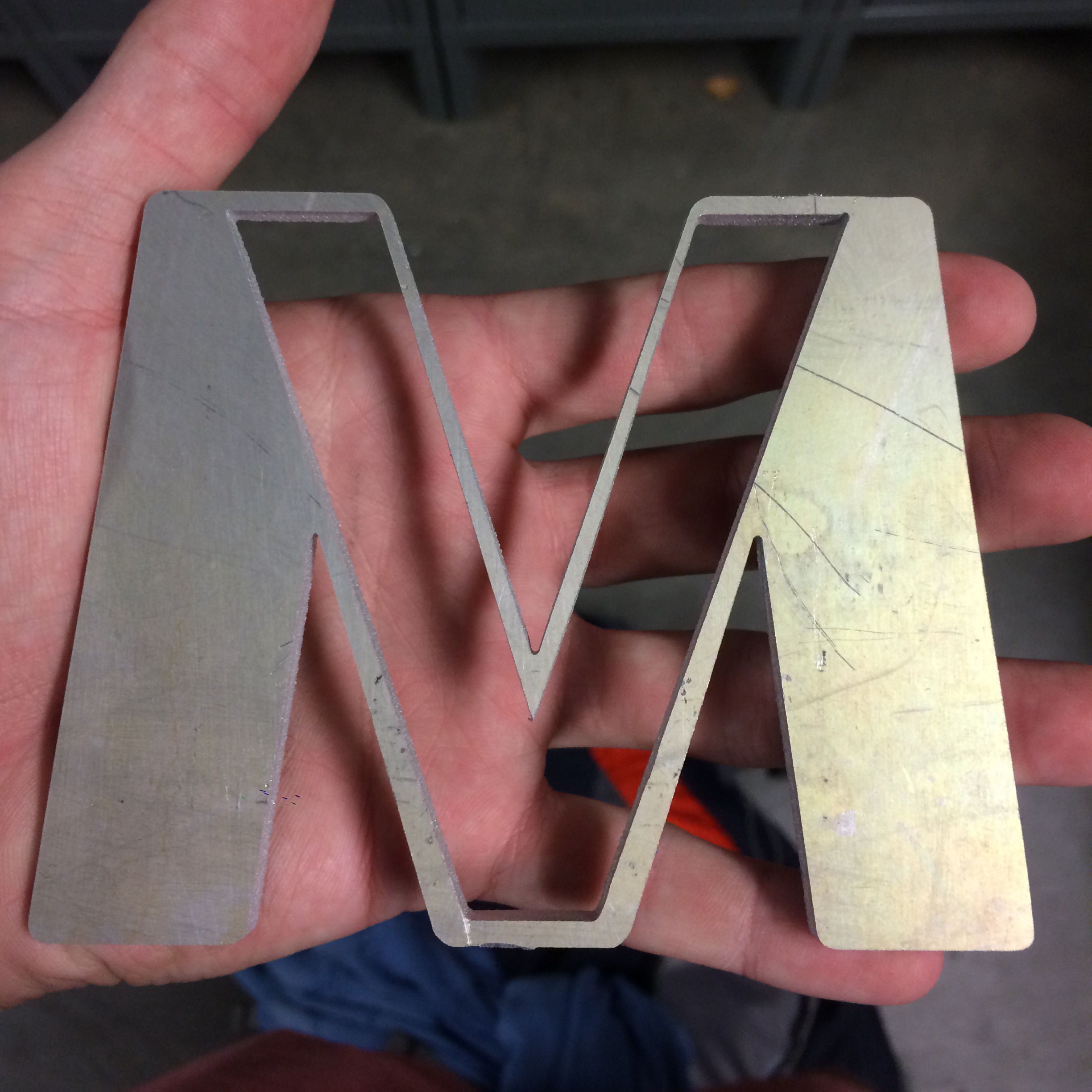 I put a lot of elbow grease into polishing it. I think the aluminum I used wasn't very high quality, so I kept hitting little pores that needed more sanding. I started with really rough sandpaper and gradually worked up to some stuff I got at the auto parts store intended for wet sanding. After wet sanding I got tired of ripping my fingers to shreds so I bought a drill-mount polishing wheel. I tried various types of silver/metal polish until I found something that worked relatively well. 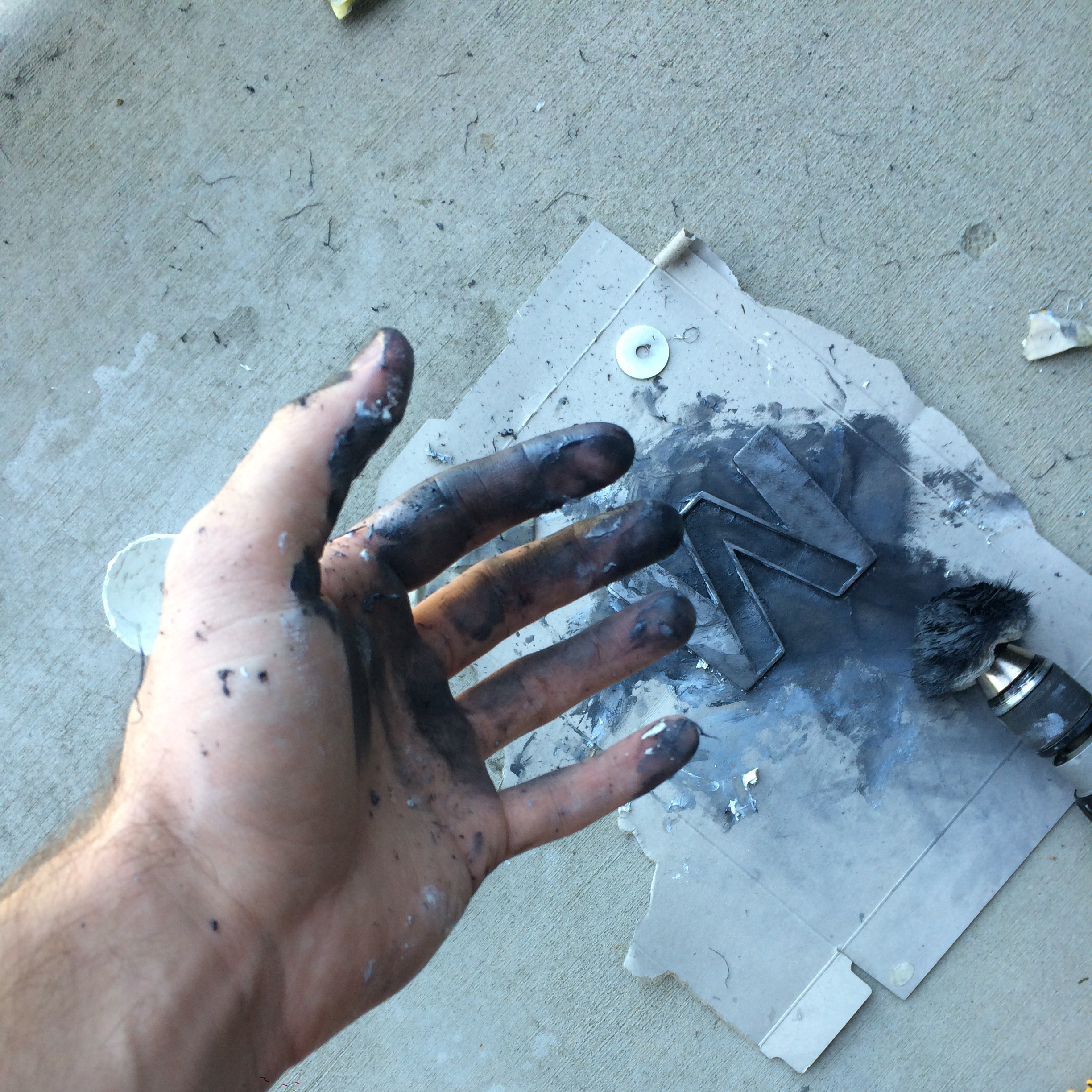 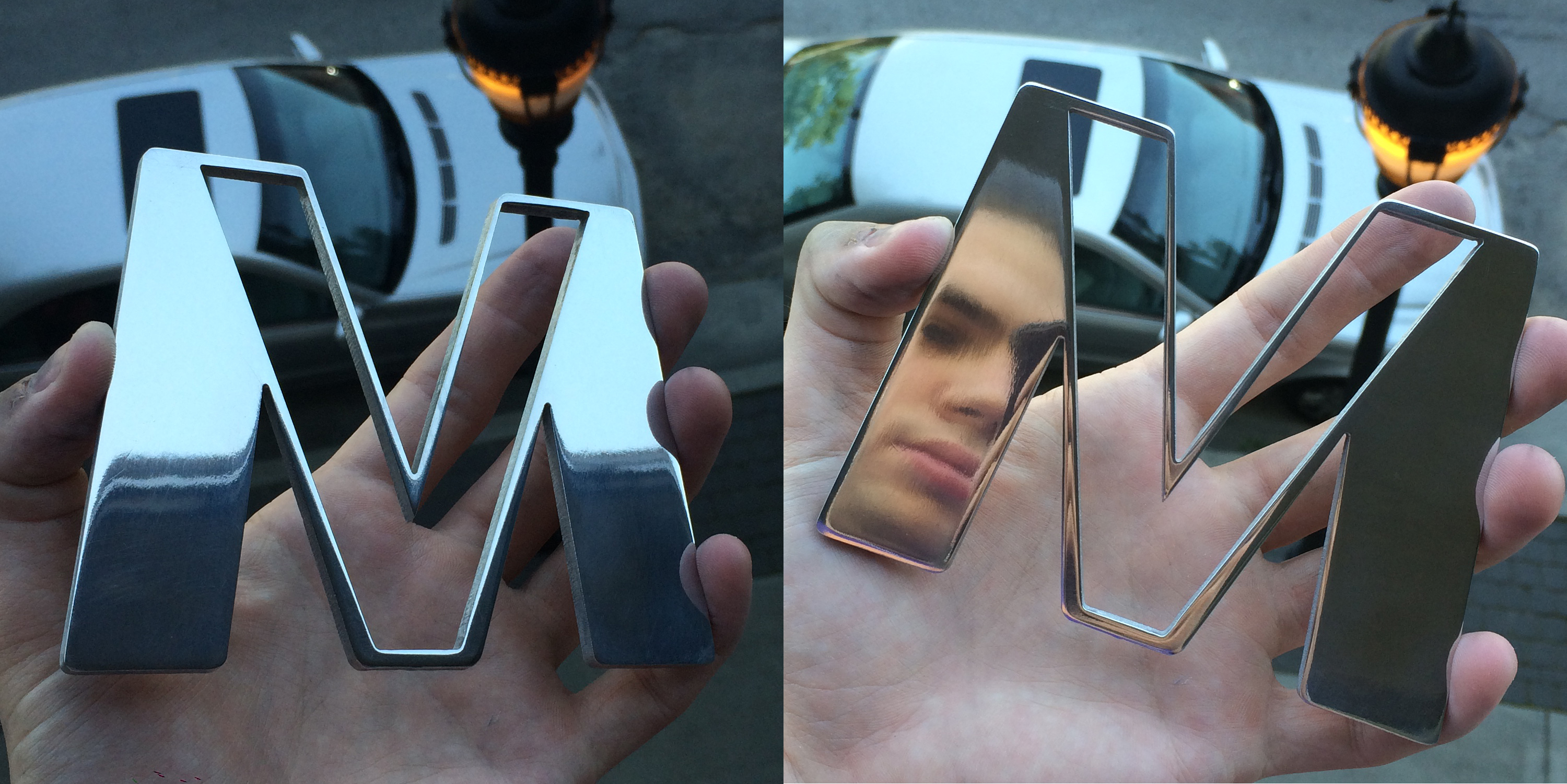 Looks pretty nice on the desk too. Kinda bummed it doesn't light up, but I think she likes it and I had lots of fun making it. 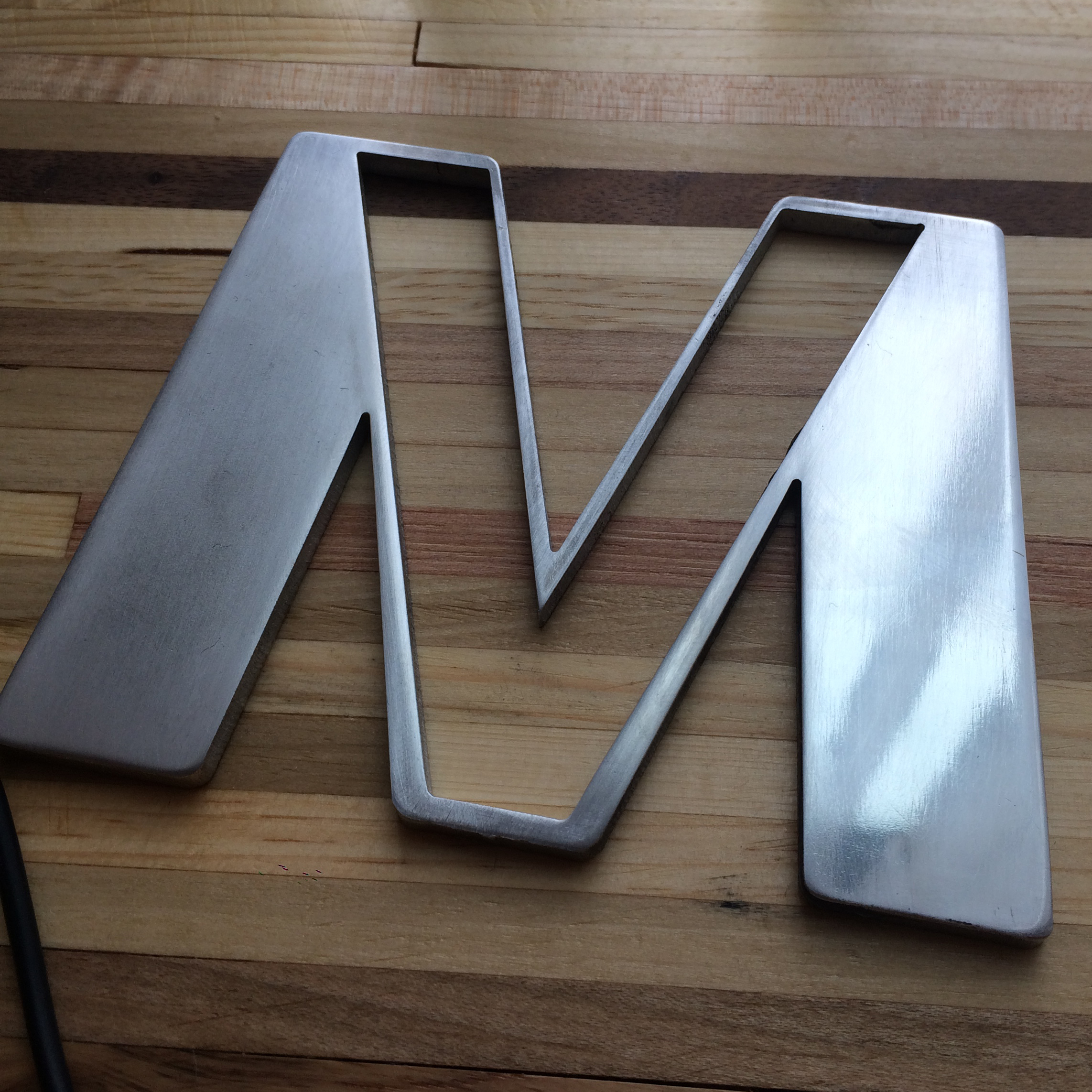